Directions to the hotel

When travelling to the hotel, always follow indications to Bilbao Airport. When leaving from airport to the hotel, get the first exit, DERIO. You´ll get to a roundabout, take the left (you must be able to see the hotel on your left now), then follow the signs to make the turn into the hotel. 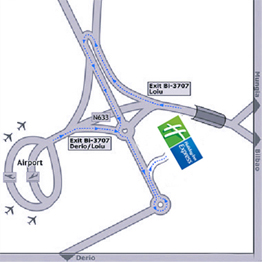 The Holiday Inn Express Bilbao hotel is ideally located at 600 meters from Bilbao airport and at 2 kilometres from the Zamudio Technology, with easy access from any direction to the airport on the A8 motorway towards the N-637 direction Mungia and taking the N-633 to the airport.

The Holiday Inn hotel Bilbao can be reached from Bilbao Centre on the bus line A3247, from Termibus (main bus station), from 05:20 to 22:00, every 30 minutes approx. (3€/trip). Final stop at Airport where you can catch our shuttle service to the Hotel.

For more information about the route and timetable, click here.

For more information about the routes and timetables, click here.

Bilbao is a large city and has excellent transport links with the rest of Spain and all the major European capitals. With extensive, convenient and inexpensive public transport, visitors to the city can choose their ideal way to travel around Bilbao area.

It is possible aldo to go on the visitis programmed by the tourist Office of the Casco viejo and the Ensanche.

With it you may have discounts in shops, restaurants and museums.

You can buy it at the departures terminal of the airport.

For more information go to the Bilbao web page here.

From the central bus Station, Termibus, you can travel with:

Bilbobús routes cover all the districts in Bilbao with more than 30 lines. There are also six night buses.

Bizkaibus is another bus road network connecting Bilbao to all the districts in Vizcaya.

Alsa operates routes to most of the cities in Spain and routes between Bilbao and cities in Germany, Belgium, The Netherlands, UK and Switzerland.

PESA operates the bus connection between Bilbao and San Sebastian.

La Union operates the routes from Vitoria, Pamplona and Logroño.

Bilbao Airport (BIO) is located just 12 km / 7 miles from the city is one of the region's main transport hubs. Bilbao Airport has regular flights to and from many cities around Spain and the main European capitals and serves more than 4 million passengers annually.

Buses, taxis, and our hotel shuttle are available outside the Departures Hall of the airport (Upstairs). The bus A2153 - bus road network Bizkaibus - travel from the airport - stop 5409 Airport Roundabout (Rotonda del Aeropuerto) - to the centre of Bilbao. Our airport shuttle operates between 6am to 12pm every day and brings you to the hotel in two minutes.

Bilbao has three railway stations, operated by three different companies: Abando Station, Concordia Station and Atxuri Station, and which can be found alongside the scenic river, in the city's El Ensanche district.

Bilbao's main RENFE train station is known locally as the Abando Station and is located on the Plaza Circular. Long and short distance trains travel from this station to a number of notable Spanish cities including Madrid (just over 6 hours), Barcelona (9 hours), Burgos (3 hours) and Valladolid (4r hours), Alicante and Málaga. Approximate driving distance from the hotel -16 minutes (13.9km - 8.6 miles).

Located on the other side of the river, the Atxuri train station can be found to the southeast of Old Quarter of Bilbao (Casco Viejo). Regular ET/FV (Eusko Tren / Ferrocarril Vasco) trains travel to many destinations, including Bermeo, Guernica, Mundaka, and San Sebastain - with a total travel time of less than three hours. Approximate driving distance from the hotel - 18 minutes (13.1km - 8.1 miles).

Many people visiting the city of Bilbao often choose to rent a car, enjoying the freedom of being able to travel in and around the city at their own pace and exploring the surrounding countryside and neighbouring towns. There are plenty of car hire companies in Bilbao that can be found in the center or at the airport.

Plenty of taxis can be found in the city centre, outside large hotels and at Bilbao Airport outside the main terminal building.

The city of Bilbao operates a convenient and inexpensive tram system, covering an area linking Atxuri to Basurto and providing travel to a number of locations and attractions, such as the Atxuri train station, the Guggenheim Museum, Arriaga Theatre, Euskalduna Palace and the San Mamés Football Stadium.

Opened in 1997, the Bilbao Metro train network is one of the most modern, innovative and stylish underground transport systems in the world. The Bilbao Metro subway travels to the northern coastline, connecting a number of stations to the city's nearby beaches.